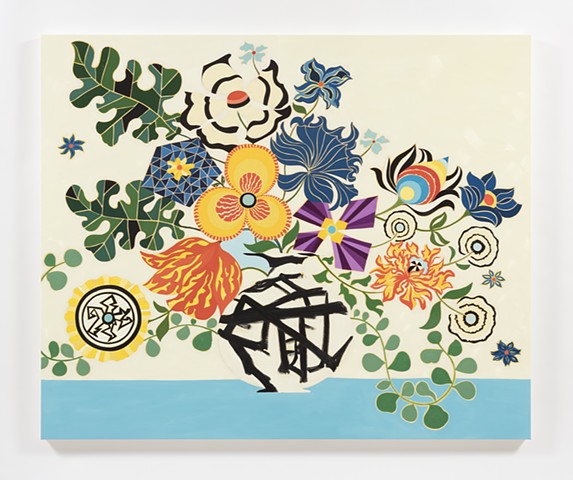 About the artist: Max Jansons was born in New York City however, lives and works in Los Angeles, California. He received an MFA from Columbia University, New York and his BFA from University of California at Los Angeles. Jansons has had fourteen solo shows and has exhibited in galleries in the US and abroad. He has been reviewed in The LA Times, The New York Times, Artforum, and was named among other important LA based painters in Christopher Knights list of "45 Painters Under 45” in the Los Angeles Times. Max Jansons work focuses on paintings’ ability to engage the viewer in an intimate way and create an unfolding and thoughtful visual experience. In his work he utilizes various subject matter, often within the same body of paintings, using both representational and abstract images. Jansons has expanded on an ongoing investigation in the tradition of still-life painting while imbuing his paintings with art historical references. His works can include a vase of flowers, a portrait of a person he admires, landcapes, or abstract shapes and visual objects that play a role in his daily life. The history of painting is folded into the subject of Jansons work as he is a passionate student of art history. Jansons explores that relationship in multiple ways, but especially with the use of his painterly gestures and diverse brush work, timeless materials such as linen primed with lead, paints ground in aged oil and pigments whose sources are rare to find. The process of reinvigorating historical tropes by utilizing a very deft facture of expressionist painting and the celebration of complex color combinations is a central theme to Jansons work.